Home / Exploring the world of AI 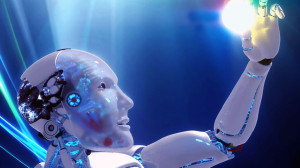 Artificial Intelligence is tipped to be the next big thing. A world where computers think and respond like human beings.

Inducing intelligence to a machine – artificially.

But where exactly are we right now? What were the milestones so far? If we compare Artificial Intelligence to the growth of a human being, it is safe to say that AI has grown from infancy – playing with toy problems like tic-tac-toe and chess – into its professional adolescence – acquiring new skills, striking out for parts unknown, exploring the real world, and seeking to discover its own limits.

But when do we know that it has grown into a full- fledged scientific discipline? If the same algorithm that learnt tic-tac-toe could learn any board game, or diagnose medical conditions or play music like Bach or learn to recognize faces, then we can say with some confidence that it’s artificially intelligent.

One of the most easily comprehensible milestone of AI was when the program Deep Blue beat Garry Kasparov, the then world chess champion. Driver-less cars were next in line with a team from Carnegie Mellon University completing the Urban Challenge, to navigate a sixty-mile course on streets – complete with street signals and cross traffic. But perhaps the most impressive win for AI was when a program written by a team of IBM researchers beat Ken Jennings, a champion in the infamous quiz show, Jeopardy. But then again, these were mere scratches on the surface as the scope and future of AI is tremendous.

Let’s now look at some of the sub-fields in this broad subject of Artificial Intelligence.

Robotics: AI opens up a whole new dimension of economic opportunities by enabling robots to work where people can’t. Some tasks might be too dangerous and costly for people but robots accomplish them with ease. These include mining or farming the sea bottom, cleaning up industrial accidents or even eliminating agricultural pests by targeting them with insect specific mechanical predators.

Computer Vision: Face recognition programs are already being used in applications of national security to recognizing your friends in Facebook pictures. But soon this ability to interpret and label images will expand to include every event, product, person, recognizable object, or scene. In fact, computer vision may arrive just in time to save us from drowning in our own informational data.

Speech Recognition: Modern machine learning techniques are driven by the ability to capture and analyze large collections of speech samples and recently an IBM team managed to reduce error rates to 30 percent. This improved results have found applications in smartphones with Google Voice and Apple’s Siri being some of the most prominent ones.

Natural Language Processing: Given enough examples, a computer program, with no real world experience and no knowledge of what the text is, can translate a piece of text from one language to another. The way the machine learns and interprets the data is similar to behavior of the human brain and we can conclude with some confidence that we are going in the right direction.

All the above fields are some of the prominent areas where AI is advancing at a rapid pace. Busigence Technologies is currently working on improving the algorithms of Artificial Intelligence in Data Products that help in making intelligent decisions for enterprises.