Ever have a question that, “Why is Linear Regression giving me such good accuracy on the training set but a low accuracy on the test set in spite of adding all the available dependent features to the model?”

The question above seems inexplicable to many people but is answered by a concept called overfitting in which your model, in addition to learning the data, also learns the noise present in it. Hence learning the training points, a bit too perfectly.

How do you solve it?

This is where shrinkage methods (also known as regularization) come in play. These methods apply a penalty term to the Loss function used in the model. Minimizing the loss function is equal to maximizing the accuracy. To understand this better, we need to go into the depths of Loss function in Linear Regression.

Now, what does shrinking do?

The need for shrinkage method arises due to the issues of underfitting or overfitting the data. When we want to minimize the mean error (Mean Squared Error(MSE) in case of Linear Regression), we need to optimize the bias-variance trade-off.

What is this bias-variance trade-off?

The bias-variance trade-off indicates the level of underfitting or overfitting of the data with respect to the Linear Regression model applied to it. A high bias-low variance means the model is underfitted and a low bias-high variance means that the model is overfitted. We need to trade-off between bias and variance to achieve the perfect combination for the minimum Mean Squared Error as shown by the graph below. 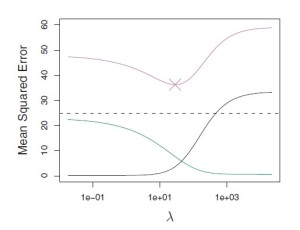 In this figure, the green curve is variance, the black curve is squared bias and the purple curve is the MSE. Lambda is the regularization parameter which will be covered later.

How do we use shrinking methods?

Ridge Regression adds a penalty term to this, lambda, to shrink the coefficients to 0 :

Ridge Regression’s advantage over Linear Regression is that it capitalizes on the bias-variance trade-off. As λ increases, the coefficients shrink more towards 0.

Interested in knowing more on such niche techniques? Check out http://research.busigence.com